The art of water witching or "dowsing" is nothing new to our world.  Scientists have found cave drawings dated as old as 8,000 years ago with a man holding what appears to be a forked stick. Dowsing has been used my Water Witches for centuries to locate water for wells and underground streams.  Water Witches were highly regarded and respected members of their communities.  Today, they are called upon in much the same ways, but the art has expanded and grown into multiple other areas, such as locating oil, Joe Smith was often called to dowse for oil, he always dowsed a Map first then went to the field. Joe dowsed for oil in several US States. Today dowsing is also used to find minerals, energy lines, ghost hunting, spirit communication, and even homework help! Dowsing has even expanded into dowsing for your health and supplements.

For more ways to use dowsing check out the articles in the Dowsing 101 section.

Military Dowsing Until recently the use of dowsing in the military was considered to be classified information. Dowsing was used during World War II. The British Admiralty and the German sea captains used it to locate ships to torpedo. The Australian Navy and the British admiralty used dowsing to locate German Submarine Wolf packs. The US armed forces used dowsing to locate Water wells for their forces. During the Vietnam conflict enlistees were screened for their dowsing abilities at USMC Camp Pendleton in Southern California. Dowsers were used in combat to locate the enemies location regardless if they were in tunnels or in a submarine or a ship. Dowsers were used to locate booby traps, message drops, supplies, mines, telephone lines, enemy tunnel systems, underground emplacements and weapons caches. Dowsing saved many lives.

There has always been controversy regarding dowsing and religion, below are several biblical references to dowsing.

The Bible has countless references to rods; however, the two primary meanings are a staff or stick used for authority or as a means of correction for children, and the figurative use of the word meaning, Christ, Christ's rule, authority or Gospel.  We'll be studying "staff/stick" and "authority."

Biblical references can be found in the following texts:

In other important texts, we are told that whatever we ask, we shall be given if we believe (Mark 11:24) and to knock and the door shall be opened (Matthew 7:7).  If we were not meant to ask and to seek, why were we instructed to do so?  See Matthew 6:33: seek first God's kingdom and all these things will be added to you.  How about Colossians chapter 3: Set your attention on things above.  And finally, Philippians 4:3, I can do all things through Christ who strengthens me.  You get the idea.

If you wish to do further research another excellent article on dowsing and religion was written by Susan Collins, Past President of Canadian Society of Dowsers can be found at on Susan's website. it is very informative.

While you are there be sure to check out the rest of Susan's site. She is a great lady and has a great deal of information available. updated March 31, 2011

No part of this website may be reproduced, stored in a retrieval system, or transmitted by any means without the written permission of the owners.

Check out the Most recent chart releases 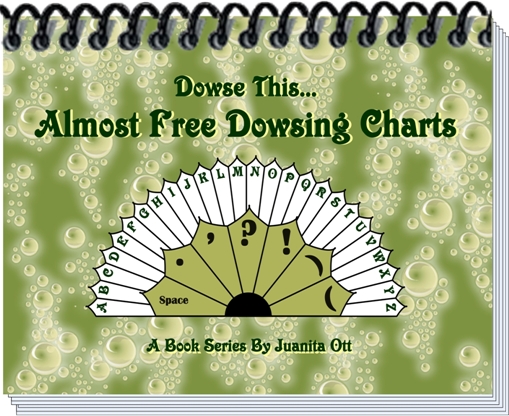 Dowse This... Lighting the Heaven Road; A Guide to Crossing Spirits Over

Please Donate if You Find the Charts Useful